The most important threats to the dwindling populations of wild Bornean and Sumatran orangutans are the following:

The Future of Wild Orangutans

Orangutans, unlike their gregarious African cousins, chimpanzees, bonobos, and gorillas, live a semi-solitary existence high in the forest canopy. With the exception of mature Bornean males, orangutans seldom venture onto the forest floor. They are truly “people of the forest,” as no other great ape spends so much time in the trees and generally does not leave the forest. 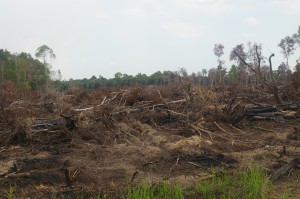 The greatest threat to orangutans is land clearance for permanent commercial agriculture, particularly for palm oil and timber estates. Palm oil plantations are particularly popular as cash crops because the palms grow rapidly and produce a greater income than logging or the intense cultivation of any other plant. Large tracts of rainforest are cleared to establish palm oil plantations. Crops are then planted in orderly rows of one single species. Monoculture is disastrous for orangutans and drastically reduces biodiversity, destroying what was once habitable primary rain forest for numerous species, including orangutans, and turning it into biological wasteland. Without forest, orangutans simply cannot survive!

Over the past twenty years, South East Asia has become one of the world’s leading sources of tropical timber. As much as 70% of the timber exported from Indonesian Borneo (Kalimantan) is harvested illegally. Illegal and commercial logging operations reduce the area covered by forest, erode the soil, and expose the remaining forest fragments to the risk of fire. In addition to sheltering orangutans, many forests also constitute the last refuge for endangered species such as the Sumatran rhinoceros, proboscis monkey, and species of hornbills.

Land clearing for palm oil plantations and timber estates not only annihilates forest but also fragments forests and confines orangutans to small, restricted areas. Gold and zircon mining, in particular, often takes place within or near protected areas of forest. Independent miners, using pans and sieves, extract small deposits of gold and large amounts of zircon-containing sand from the sandy soils beneath the forest. Although in many instances, these operations are small in scale, the damage done to the forest is immense. Areas of pristine rainforest are quickly transformed into barren moonscapes; rivers become devoid of life, polluted by heavy metals such as mercury that are used to separate gold from the soil.

As much as 70% of the timber exported from Indonesian Borneo (Kalimantan) is harvested illegally.

In addition, orangutans are caught or killed in plantations as agricultural pests. If the victim is a mother, her infant is captured and sold as a pet. Some infants are subsequently confiscated and taken to rehabilitation centers. There, an attempt is made over a number of years to reintroduce the ex-captive orangutans back into the forest. Although essential to the welfare of individual orangutans, the rehabilitation and release process is difficult and time consuming. As a solution towards conserving orangutans, this process will not be enough to save orangutans as viable populations in the wild. Free-ranging orangutan populations will survive in perpetuity on this planet only if large tracts of rainforest in Borneo and northern Sumatra are preserved and protected and orangutans are not routinely killed as agricultural pests. As recently as 2012, some Malaysian companies working in Indonesia were offering bounties for the killing of orangutans and other endangered species in their palm oil concessions.

Fire is the mechanism of choice for clearing forests. During El Nino seasons which are associated with long droughts, fires are started to clear forest for gardens, plantations, and timber estates in one area and then spread uncontrollably throughout wide regions. Unfortunately, the El Nino weather phenomenon is more frequent than it ever has been in the past. In its wake, it brings drought resulting in massive fires which are catastrophic for the forests of Borneo and Sumatra. 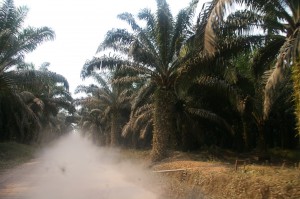 Tropical rainforests are of global importance not only to wildlife but also to humans. These forests are a storehouse of plants, fungi, and micro-organisms, many of which could be important sources of medicines, materials, and even foods in the future. Rainforests also help regulate global climate and protect fragile soils and watersheds, helping prevent flooding. Species such as orangutans also co-exist and interact with other rainforest plants, animals, and insects in a multitude of intricate ways (many still yet to be unraveled).

Orangutans inadvertently play an important role in shaping and preserving the forests they inhabit through branch breaking (a type of pruning), snag pushing, and seed dispersal. The disappearance of orangutan populations may have profound consequences for remaining tropical rainforests and thousands of other animals and plants that inhabit this fragile environment – consequences, which as yet, cannot be fully evaluated. 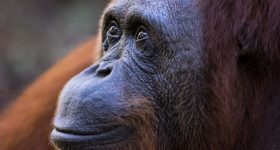 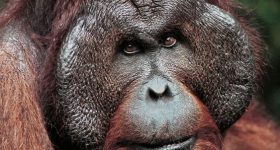