Orangutans live mainly in trees, use tools, teach each other skills, live in semi-solitary conditions, employ mating strategies based on the male phenotype (i.e. dominant flanged male versus non-flanged male), recognize not only themselves but over 200 varieties of fruits.

A long-call is when a dominant flanged male emits calls to alert sexually available females of his presence.

The dominant flanged male orangutan, communicates his presence with the long-call. The long-call is a series of long booming pulses and grumbles, which can be heard through dense jungle as far away as 1 kilometer. Flanged males that are emitting long-calls can be identified, and the context of their call can be interpreted by females, as well as other males. The caller is communicating his presence and depending on his purpose will employ specific behaviours. For example, a dominant flanged male that detects another male nearby may give a series of fast, excited calls of short length, with pulses and bubbles. These calls are often associated with snag crashing (i.e. pushing down dead trees).

Another example of a long-call is when a dominant flanged male emits calls to alert sexually available females of his presence. His calls are of a longer duration than that of his confrontational calls with other males. At this time the dominant flanged male does not snag crash, but calmly sits down on the ground in a rather conspicuous location. Bornean females can identify who is making the long-call, as well as understand his intentions. Mature females that are not with dependent young will move towards the dominant male for mating purposes. 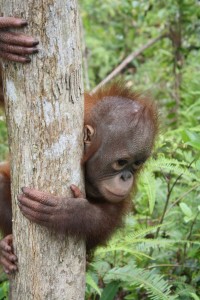 Female orangutans rear their young for 8 years. This is the longest rearing time of any primate, other than humans. Females teach their offspring how to nest build, how to swing between trees, what plants to eat, how to find insects, how to collect honey, and how to chew plants if water is not available.