You are here: Home / Uncategorized / OFC Site is Launched!

Orangutan Foundation Canada is a free-standing foundation under the laws of Canada which was established to support the work of Orangutan Foundation International (OFI) which is based in Los Angeles, California and in Kalimantan, Indonesia.However, OFI’s Canadian roots go deep. OFI was founded in 1986 by Canadian Dr. Birute Mary Galdikas, a Full Professor at Simon Fraser University (SFU) in Burnaby,B.C., Canada. 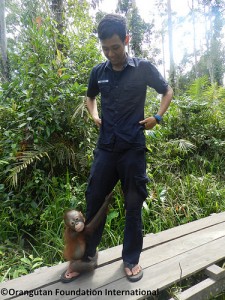 Dr.Galdikas has been honoured as an Officer of the Order of Canada and has received several Canadian awards and medals, including the Queen’s Jubilee metal. Volunteer construction teams helping build bridges and causeways in Borneo for OFI are led and organized by former Galdikas students from Simon Frasier University in Vancouver.

We hope that the OFC website will provide information of interest on orangutans and their situation as well as their native habitats. We also hope that OFC will grow and provide essential support with OFI for all orangutans in the wild, their habitats, and captive orangutans wherever they may be.

If you want to learn more about what we are doing, go to our work page.

To find out how you can help orangutans, go here.